20%
In reply to ponsaelius:Hell No.
In reply to Bob_Shutts:This. Goo Be Gone will get the job done with no residue at all.
This exact problem happened to my calendar! It was synced with my iPhone and then suddenly stopped working. I
In reply to orbsitron:Could not have said it any better myself: "That's one doomed space marine." Also, "
Let's do it! Just installed on my Windows 7 machine. Buh-bye Chrome. Now let's see if I get any warn
These look great! Super impressed with the devices HP is making. I think these will age well too. Wood is alwa
In reply to Andi:Andi: I think your comment is a little oversimplified. Things have come to a head recently, b
Favorite version of Windows: 10Favorite *past* version of Windows (overall): 7Favorite only in terms of nostal

I work as a Data Scientist building ML & AI models and Microsoft and my world are beginning to converge meaningfully. The company I work at is purchasing Azure and gradually moving away from legacy data science platforms like SAS. Overall I'm pretty excited about things to come. Here are 5 of my hot takes from Build:

1. I don't recognize Microsoft as a company at all anymore. Maybe it's because Build is for a particular part of their business (?) but you would hardly believe this is the same company that made Windows. They might have mentioned it 2x in passing in the keynote. *All* they seem to care about is Azure.

2. Microsoft displayed some really hideous, laughable even, hardware that connects to, or is an extension of, the Azure cloud for on-premise deployment. Seriously it was reminiscent of IBM tape backups and mainframe servers. Apparently use cases include highly sensitive data that the owner doesn't want on the cloud, or simply not having the bandwidth to upload and download terabytes of data to the cloud. Parts of the Azure cloud are not actually connected to the cloud.

3. They handled the Edge transition to Chromium super graciously. It was almost like their capitulation on the original Edge browser never happened. Or, it was so gracious you forgave them, moved on, and listened to what was next. The tech world moves so fast. One new helpful Edge feature is rendering and internal support IE, as lots of corporate intranet sites are still optimized for IE.

4. Azure's processing power and speed is super impressive. They showcased a regression model using the Azure cloud backened and Power BI frontend being built on millions of rows and thousands of columns in milli-seconds. It was totally crazy. SAS can't do that. Python can't do that. Actually several of the ML and AI features they are bundling as part of Azure are super exciting: voice recognition and NLP, form recognition for processing and transforming unstructured data, decision engines based on reinforcement learning. There is A LOT to like right out of the box.

5. Gaming is still a priority for Microsoft thank goodness.

Bonus #6, I got to meet Paul at Microsoft Build! He was gracious and pleasant. 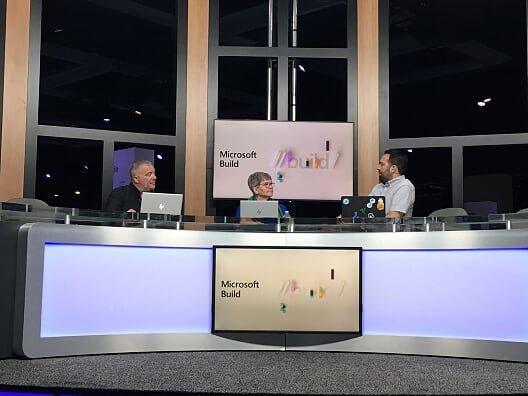 What about you? What have you noticed from Microsoft Build?

In reply to yaddamaster:You are on point! "Cortana failed because MS failed in mobile." This is a another knoc
Microsoft taking so many L's I've been a fan of Edge since day 1. I too hope they keep design of Edg
In reply to Patrick3D:Yes. I also recommend getting a ThinkPad. Legendary work machines.
In reply to StagyarZilDoggo:Can confirm. Typing this from a 13 year old Gateway with a Core 2 Duo and 8GB ram.
In reply to dcdevito:Excel!! Excel is one of the greatest MoFo pieces of software ever written. An absolute ma
What a riot. This is just stumbling from bad strategy to worse since at least the days of Zune. Groove was alw
In reply to Angusmatheson:I love this post and this reply! A few quick thoughts...+ The control center and set
Good for you. I'm with you on the paying for a product part instead of being the product.Tried FB years a
In reply to offTheRecord:Good summary. Yep, completely agree on Quicken occasionally having trouble with one a
Office, Quicken, WinTV, Cyberlink Power DVD, Adobe Photoshop, Movavi Video Suite, MatLab, Daemon Tools, Alcoho
lol still working on adding a visualizer?!?!! come on now. winamp 2 was better. just kill it already.
In reply to Delmont:FCU is just a total mess IMO. Installed on 3 machines - two of which are less than a year
That's a beautiful computer!Little surprised at how the colors on the keyboard held up. Could use some re
In reply to tom_james:Seeing other reports of this exact roll back issue with OneDrive!Maybe I'm an outli

Machine #1: Start menu became completely unresponsive after waking from sleep. None of the usual workarounds helped (e.g. reboots, restarting explorer.exe, sfc /scannow, etc.) Had to reinstall Cortana in PowerShell to get it working. Now that is a user friendly experience! Rolled back to 1703 – works great again.

Machine #3: So far so good but it’s a SP4. Going to keep this one on 1709 to see how quickly they release updates!

Hearing lots of discussion of missing apps in the Start menu, problems emerging after sleep, and Razer machines becoming completely borked. What about you? How reliable has 1709 been for you?

Crazy Chicken you've got the retro computing bug. If I may, the above tutorial is off base. I wouldn'
Beautiful! You are so right about this vintage machine being capable with the right amount of upgrades. I'
LOL. This thread has got me trying to relive the past by installing a bunch of these OS' in VirtualBox. Aahh -
Here's my list:Windows 10 - I really think this is the best version of Windows. They got a lot of stuff right
In reply to StevenLayton: Windows 3.11 was also my first foray into computing. The integration with DOS and me
In reply to FalseAgent: Windows 2000 was amazing