I’ve been thinking lately about some of the features in Windows 10, and two things are striking to me: first, just how many of the current new or revised features last saw a major refresh (or were introduced) in Vista; and also how Windows 7 was actually a bit of an odd-one-out.

On the first point: the comparison below. Yes, some features listed for Vista did debut in editions of XP first (such as “Journal” and “Snipping Tool” in the tablet-edition, and “Media Center” from that respective edition; but Vista was the first OS they were “there for everyone”, similar to how Plus! features in the 9x days became integrated in future releases); and yes, a number of features listed for Windows 10 (File History, File Explorer, Task Manager) were first introduced or revamped in Windows 8 (but let’s face it, the vast-majority of users will have never used 8, so 10 is where they’d first encounter them). 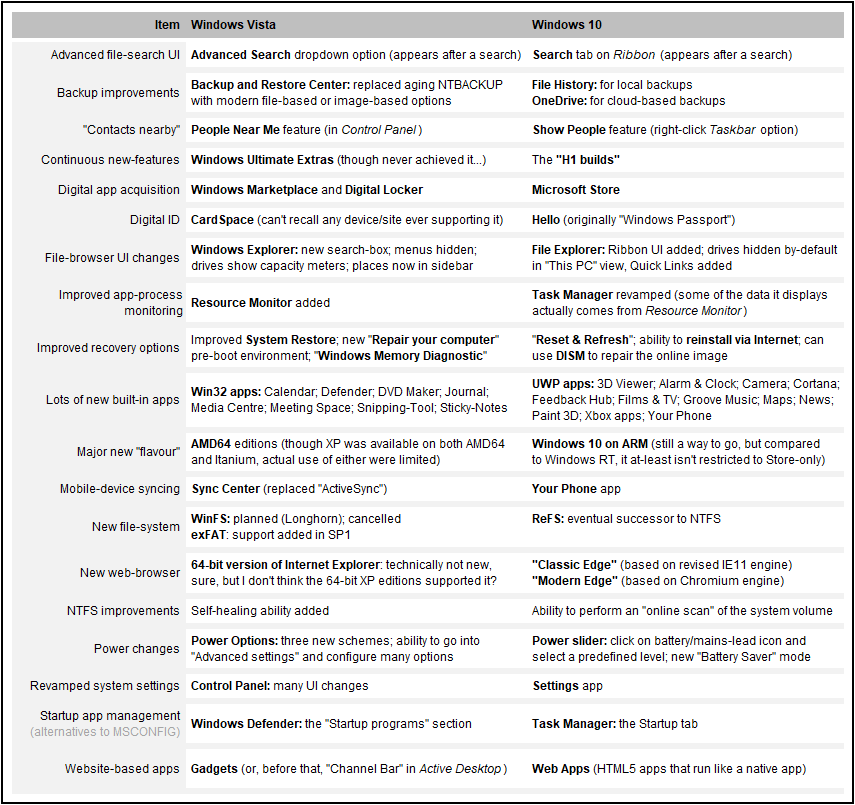 And as for Windows 7: it is striking how a number of new or updated apps (Calendar; Mail; “Meeting Space”; “Movie Maker”; “Photo Gallery”) and Control Panel options (“Pen and Touch”, “People Near Me”, “Tablet PC Settings”) in Vista didn’t make it into Windows 7; and yet today, in Windows 10, virtually all have re-appeared in one-form-or-another.

(Tip: to find “Movie Maker” in Windows 10: open an image in the default “Photos” app, then click “Edit & Create”, then “Create a video with music”. The UI is very-much like the old Me/XP/Vista layout!)